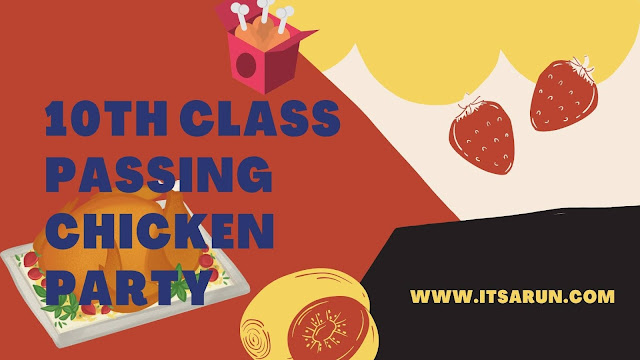 My class 10th result was out and I had pass with good percentage. My family was also happy with my percentage. I told them that I want to give a party to my friends and I want money. Mother also gave me money.

My two friends Bikas and Sumit also passed in their class. We made a plan to go to the village together. All three of us reached the village on the same day.

My two friends Sandeep and Rohit lived in the village.

Everyone reached the village. If you pass in class 10th or 12th, you have to distribute the sweets in your neighborhood.

And everyone knew that we used to study in 10thclass and our result was out.

Me and Bikas went to the market and brought sweets and we distributed them in our neighborhood.

We had fed sweets to the neighbors and now it was the turn of our chicken party. We went to the market and brought chicken from there.

We were going to cook chicken in Sandeep’s house. When we reached Sandeep’s house with chicken, all my friends were sitting there. We had brought the whole chicken.

Everyone was cleaning the chicken together, then cut the chicken into pieces. After that Sandeep’s sister was at home, so we gave her chicken to cook. All of us were sitting and talking. Rice was also made there.

Earlier our plan was that we would go to the forest to cook chicken and eat there. But that plan was canceled again and we cooked chicken in Sandeep’s house. Chicken was cooked and we were going to eat it in the forest.

We took chicken and rice to the forest. We also took cold drinks to drink. All my friends had reached there. We had come with a disposable plate and glass, we served food in it and all sat down in a circle.

Sitting with friends and enjoying food is different. Chicken was very tasty. Everyone was enjoying that small chicken party.

Thank You for reading my blog. I hope you had like it.