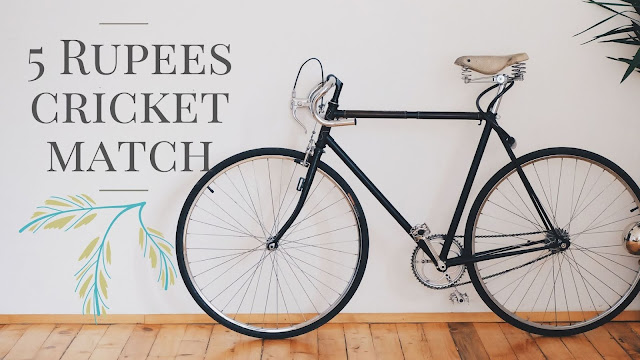 How I broke my cricket bat

When the summer vacation was going on, all my friends came to the village. One day we took a bicycle in the evening and went for a walk. We were four friends, we were traveling, talking, having fun. We had come 1.5 km away from our village.

At that time when the wheat was harvested, the fields were all empty. We were returning to the village.

Some children were playing cricket on the way. We thought that we would go and play cricket with them. We went to them and asked them to play cricket, then they asked us to put a match.

We did not bring money at that time. But a friend of mine had money.

He put 5 rupees in the match. At that time even 5 rupees was too much for us. Me and all my friends became in a team and all of them in a team.

We won the toss and chose batting first. Me and my friend went to the opening.

Got out in first ball

I was on the batting side. First ball came and I run for a single but my friend run for double he reached but I could not reach and got run out.

I was angry and disappointed. I got out but my friends played well and score good run.

Now it’s our time for fielding. I stand for keeping. Opponent team did not play well and we won the match.

After winning match we came back home. We were all very happy.

After coming home, we shared the money among ourselves. Everyone got one rupee and who had played very well gave 2 rupees.

We were all sitting together at night. We were talking about a cricket match among ourselves.

My friends were saying that now tomorrow we will go back to play cricket. When we came to win the match, there was a lot of confidence in everyone. It was decided to go again the next day.

The next day in the evening we were ready to go. I had a bat and I also took my own bat.

When we arrived, the children were playing cricket there. We again put a match of 5 rupees. This time too, we won the toss and chose batting. This time also I went to open, but this time I did not get out on the first ball.

This time I played very well and also scored good runs. But my friends did not play well and we did not give the target of big run.

When it came to our fielding, then we did not even make a field, we dropped many catches and we lost that match.

My bat also broke while playing. We had lost the match and my bat was also broken.

Frustrated, we came back home. After that we did not even go there to play cricket.

Now that my bat was broken, we could not play cricket even at home.

Now how did we arrange the bat or make a new bat? To know this, you have to come to the next blog.