Adventurous journey to my exam center 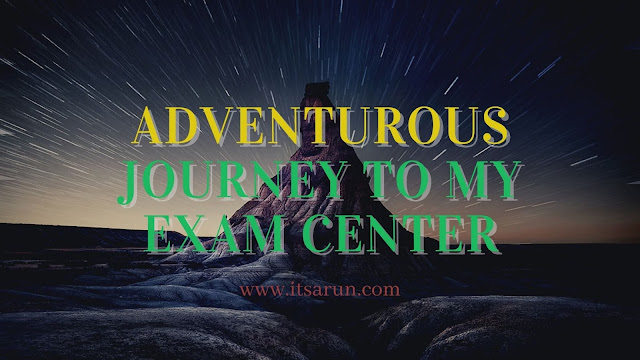 The next day is my SSC CHSL exam. I got my admit card and the exam center is in Bareilly. My exam timing is 10 am and I have to reach the exam center before 9.30. I go to the train station to know the timing of the train.

The timing of the train is not fine for me. If I take the train I will be late for my exam. So I decide to go by bus. The bus to Bareilly used to go on, so I have no tension with the timing of the bus. I make a photocopy of my all documents.

I was pretty nervous because I never travel to Bareilly alone even I don’t know the route of my exam center I was dependent on the google map. I slept early at night because I have to wake up early in the morning.

The next day I wake up around 4 O’clock and get ready to go. I had already told my friend that if I have to go for the exam, then I will go to your house by putting the bike.

His house is near the bus stand. I reach his house and wake him up he came to drop me at the bus stand. After waiting for a while, the bus to Bareilly arrived. I sat in the bus and then my friend went home.

I open google map and check how much time it will take to reach the exam center. It was showing 89km and 2: 30 min.

It was a little cold in the morning so I was wearing the sweatshirt. The bus conductor come to me and ask me where I have to go.

I tell him the name of the exam center and told him that it was in Bareilly. I asked him where I would have to get off to go there. He also did not know anything about it, so he gave me a ticket to Bareilly.

I reached Pilibhit and the bus stop there for a while. There are few people on the bus who all came out from the bus. I also came out of the bus and go to the toilet.

The bus conductor was missing

After some time all passengers and drivers sit on the bus I also sit in my seat but the bus conductor was not there. The driver goes out to see the bus conductor but he could not find him. We all are waiting for him and I was a little nervous that I should not be late in arriving.

The bus was not starting

After a long time, the bus conductor came and sent it to the officer. He came back from there and sat on the bus and said to run the bus. The driver started the bus but he did not start the bus. Many times he tried but he failed every time.

The driver told us to push the bus to start the bus, then we got off the bus and started pushing the bus but there was no use for that.

Seeing him, the officers reached there and got the driver off the bus and sat in the seat himself, and asked us to push the bus.

He started the bus on the first attempt then we all get on the bus and go on. I was getting nervous it took lots of time there. I was looking at the phone again and again and checking the google map.

I got off the bus some distance before Bareilly. Getting off the bus, I asked a man on the way to my exam center. When I reached the crossroads, some auto-rickshaws were standing there. I ask the driver to get me to my exam center and they agree that.

But they are waiting for the passengers and I told them that I was getting late for my exam so they demand more rent than the normal price. I bargain the rickshaw driver and reduce the price to half than some passengers also came and he started the auto-rickshaw.

He drops me near another road and told me that he did not go forward and I have to take another auto-rickshaw.

Took the lift on the milkman bike

I walk to some distance and waiting for the rickshaw behind me a milkman came I ask him for the lift he was hanging containers of milk in his seats.

I sit on his bike within 5min I saw my exam center. I got off the bike and thanked him and ran towards the exam center.

I reach my exam center in time. I deposited my bag outside and went inside the exam center.

In the exam room, I find my classmate there. He came with his uncle. I gave my exam. My exam was quite good.

I and my friend go outside he goes with his uncle. I collect my bag and now I have to decide how am I go to my home by train or by bus.

I go near the road there was a railway crossing I cross that and saw the train station. I decide to go by train then the train arrived and I have not reached the station. I thought that the train will stop for a while I reach the station and go to take the ticket.

Race to get the train

I hear the voice of the train that was moving I ran toward it but I was late. The person who is sitting at the ticket counter came to me and told me to take the auto-rickshaw and go to the next station which not so far from there.

Quickly I ran towards the highway and get in the auto-rickshaw. I reach the next station the train was standing there I quickly get my ticket and ran towards my train. I quickly climbed into the train and then I breathed in peace.

It took 3 to 4 hours when I reach my station. Then I call my friend to pick me up. Then I drop him at his home and move towards my home. I had already spoken to my mother to cook food. After going home, I washed my face and ate food, and slept.

It was an adventurous journey for me…

Thank you very much for reading my blog. I hope you had enjoyed it.