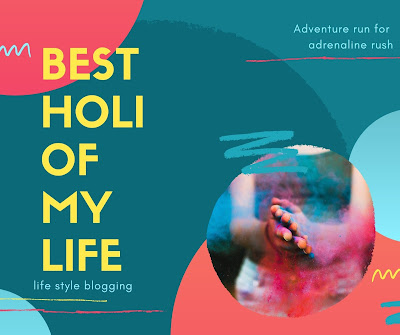 This is the time when we were living in Meerut.

In morning I wake up and in my house balcony I started filling water in water balloon. The children were all coloring each other. I was sitting and watching them from my balcony and waiting to fill up all my water balloons.

When my balloons were finished, I went down. All of them together made me paint from top to bottom. I also put color on them and then we went away.

Now we were all going to their house together, who had not come to play Holi yet. Whoever looking us without color, we were putting color on them. A friend of ours lived in a building far away from us, and he had not yet come to play Holi.

We will be at least 14-15 boys all of us have reached his house. We reached the bottom of his building and called him down, but he did not come out. So we all went to his room. Bring him out of the room and make him a ghost with full color.

After applying color on him, we came back to our building. Everybody started having fun together.

Seeing them, I stood away so far that they would not even catch me.

What did they do to catch me? My friend gestured to catch another boy, I thought he would go to catch him. But they came to my side and caught me and took me and laid me in the mud.

It was noon playing Holi and no one was thinking of going home. So we all made a plan to play cricket. We reached the ground with the bat ball.

The one who had a bat and ball at his house just went to his house and came straight with the bat ball. No one went to wear clothes at home. Whoever was in the condition reached the ground to play cricket.

We played cricket for a long time and then when everyone got tired and the sun rose, everyone went home.

My experience of that Holi

That was the best Holi of my life. Never before had I enjoyed so much on Holi.

Best Holi of my life in school