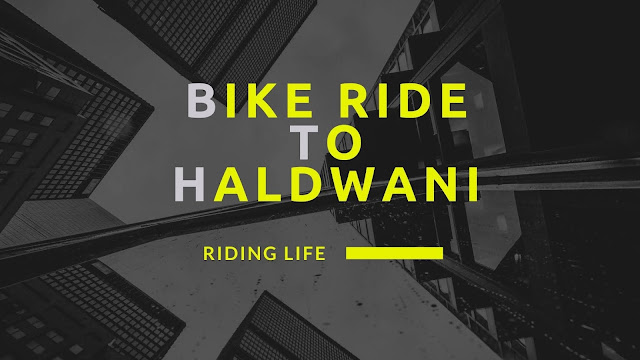 It was my first year of B.Sc. I don’t get books from my college and I was going to have my exam in 4-5 months. So I joined coaching classes and I need books.  When I asked in college, they said that it would take time for the books to arrive. And suggest me to go to University and take books from them.

My University was in Haldwani it was around 80-90 kilometer from my city.

I told my parents that I have to go haldwani to get my books they agreed then I asked my friend Vikas that will he go with me. He also agreed to come.

We are going by bike and I was the only rider Vikas don’t know to ride bike.

We are going in the morning time. I pick up Vikas from his house and we are ready to go.

It was quite fun riding bike with friend. I don’t Know the exact route of the Haldwani , I am using google map because it was my first time to Haldwani.

In starting roads are quite good with less traffic we are maintaining good speed. It would be around 10 in the morning and the heat had increased a lot. About completing 30kilometer we take first stop at fuel station because I came out of the house without fuel.

We fill up fuel and move ahead. The road ahead was very bad and the path was going through the entire forest. The forest on both sides of the road looked very beautiful.

After crossing forest we entre in village area. It’s too hot we decide to take a water brake. I stop bike under the shade of tree. I was carrying a water bottle we drink some water and sit there for some time. We were tired of sitting on the bike.

After resting, we started riding again. We were using Google map, but sometimes Google Map also fools you.  We had to take a left turn there was a road, but the Google map was showing the way forward. When we reached the location of Google Map, there was no way. We came back again and we took the route from where we had to turn.

We entered the city and reach the university. Collected books from there, We found a place to roam in Google Map, but it was far away from it and the heat was also getting bottled up, so we decided to go back home.

We both have bags full of books.  We found a place to roam in Google Map, but it was far away from it and the heat was also getting bottled up, so we decided to go back home. We were feeling hungry, we were going to see the shop to eat, but we could not see any good shop. So we decided to go to our favorite shop to eat.

The way we entered the city, I forgot the road and went ahead. Going ahead, we thought that we were going in the wrong way, so we did Google maps.

We had come far ahead of the path we had come, which was the shot cut road. The road we were going through now was a long road. We continue on the same road and reached the same place from where we entered the city.

Crazy Fun while coming back

On the way back, the road seemed quite small. After entering the forest, took a break at a place and took some photos. We crossed the forest area and then stopped at a shop and took some snacks from him. There was also a hand pump, we drank water and filled the bottle.

After moving from there, we stopped straight at our favorite shop to eat food. We ate a full meal on that and then left the house.

Thank you for reading my blog
I hope you had enjoyed it.