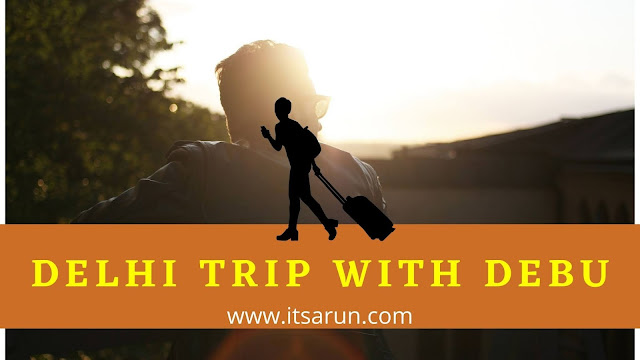 Me and my friend Debu had filled the Air Force form, and we had also gone to the last date to fill the form because of which our exam center also came very far which was in Delhi, and Delhi is far away from Uttarakhand, but it was a matter of fact that the center of both of us was together.

At that time, I used to go to B.Sc. The brother who was our math head also had the same center. So they asked me to take their brother along, now three people were going to leave. Our exam was in the afternoon, so we had to sit in the bus at night to reach the time.

We all boarded a bus and left for Delhi. We continued to talk and slept in the middle. We reached Delhi in the morning. Now we had enough time to reach the exam center. So we decided to visit Delhi. We decided to go to Red Fort first because that was the nearest. We sat in the bus we knew that pocket cutters kept roaming around in Delhi, so we were sitting cautiously.

The bus left, a few people were waiting for the bus, the driver stops the bus there and a family boarded.

Some other boys also climbed behind them and one of them took out purse from Uncle’s shirt pocket and ran away from the bus. Uncle ran after him to catch him, so the people with that boy also came.

So Uncle lets him go and returns to the bus, all this happened so fast that it took a little time to understand what happened to it. Before that incident, I used to think that the thief would secretly take out the phone or purse from your pocket. But I was also a little scared to see him but I had friends with me so that incident did not have that much effect on me.

Then the bus drops us at the Kashmiri Gate. We walked on foot to the Red Fort. It was morning time and we reached in front of the Red Fort Gate. We had heard that the pollution in Delhi is high, but had never seen it but saw it today. We went inside the gate but we could not see the Red Fort properly due to the smog. We sat there for a while, clicked the picture then we went out of it. There was Chandni Chowk in front, we thought he would go and see.

We went inside Chandni Chowk only a few shops were open, because it was morning time. Then we thought of going by that and we started coming back towards the main road. Just then, a man came to us on the way and started asking about the situation, where are you coming from?

Debu and that man were walking together and I was following them and another friend of mine was walking ahead of them. Debu was talking to him and I was also alert at that time that he is not a thief. I was following him, so I was watching his movements. He was sometimes putting his hand in Debu’s pocket sometimes touching him sometimes he was holding his hand.

Debu told him that we have come here from Uttarakhand to give exams. So he started saying that the people of Uttarakhand are very sweet, work will continue in life, but fun is also important. Tell me if you want to have fun, I already had doubt about it but after hearing his talk, I was convinced that he was a gay and what fun he was talking about.

We took auto from there and left for Palika. We do some shopping from there and move towards our exam centre. We gave the exam and now we had to go home and it was evening. We caught the torn bus and reached Anand Vihar bus station.

It was night by the time we reached and we were not getting the return bus, we were looking for here and there. We found a man, he asked us where to go then he took us to the private bus. The fare for that bus was a bit higher but we were ready. After sitting for some time near the station, our bus arrived.

We went inside the bus and we caught the last seat. The bus also had a sleeper, so Me and Debu climbed into a sleeper, We had given the money for the seat, but we did not know that the seat and the sleeper have different rates. We did not even open shoes and sat up, I told my other friend that we will change the seat later, he was sitting in the seat below and we were climbing up in the sleeper.

After a while, the seat started filling up and a man started checking everyone’s ticket. And while checking, he reached us, I showed him the ticket then he told us “Get down”, now we start thinking why is it taking us down. So he said that you paid for the seat and not for the sleeper and we came down and sat down at the friend I was going to change the seat with.

We move from there at night and reached home in the morning.

After coming from there, I used to tease Debu in the name of his friend we met in Delhi and also have fun with other friends…

Thank you very much for reading my blog, I hope you had enjoyed experience of mine…