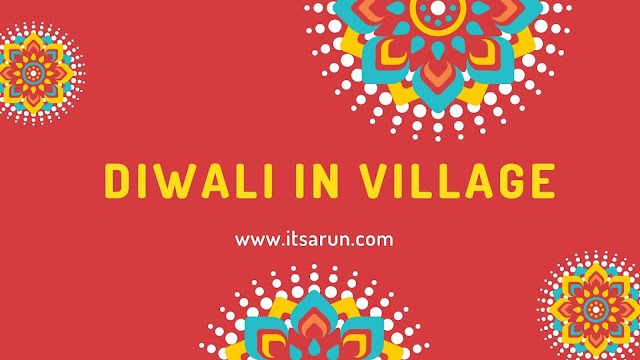 When we went to the village, we did not take the firecrackers, so the father gave money to Grandpa and sent me to buy fireworks with him.

We did not have a bike at that time, me and Grandpa went on a cycle to take firecrackers. When we reached the market, it was a lot of firecracker shops, I and Grandpa put a round of market. After that we went to a shop and bought firecrackers.

Even if you buy all the firecrackers for the children, they seem to have less. And so was my condition. Our bag was filled with firecrackers but it seemed that if there were more, it would have been fun.

On the way to home

There was no aunt at home but her husband and young son were at home. After a while uncle started looking at our bags to see what we had brought.

I said yes to them, but the same thing was going on in my mind that keep it back is very less. I gave them a packet of firecrackers with a dead heart, and started complaining to myself that there is nothing, I have many. We came home after that.

Then it was night and it was my turn to worship. Everyone got together and worshiped. Then came the turn to distribute the offerings, I was asked to distribute sweets and for distribution, I was given a box of sweets and fruits were given along with them. I went and shared the offerings. I started from one side and whatever I got, offerings was distributed.

I was having some difficulty in distributing offerings because I had two boxes, one for sweets and the other for offerings. So I used to give sweets first and then give offerings. I reached the aunt’s house in the same way, she was sitting with her son in her lap.

I gave them sweets first, after which I bowed down to give offerings, then the box of sweets fell down. Now I started looking at them and started thinking what to do now. He looked at me and said that take the top up is not dirty. I also took as much as I could and left it below, After that I left from there and started distributing sweets and offerings in the rest of the houses.

What I was doing, I was eating sweets in between but when they fell down after that I distributed all the sweets and offerings and did not eat anything from them.

I did not tell anyone at home that I had dropped the sweets.

Thank you for reading my blog. I hope you had like it.