Today I am going to tell you about my experience when I go for the open Indian army recruitment rally. 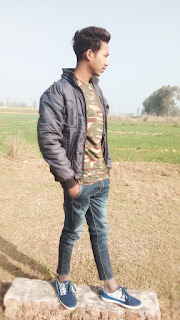 Me and my friend Debu fill the army bharti form and we both were do running practice. I am not good at running but I was trying my best every morning I wake up at 4’o clock and go for my running practice.

I go for running once in morning time, Debu was running twice in a day in morning and at evening. He was running before many months ago from I start running practice.

Open army bharti was held in the Banbasa army camp, which was not too far from my home. Me and Debu was going together in his bike. Rally was starting at morning time but we don’t want to be late so we decide to go there at night. Debu came to pick up me and we move towards the army camp. In middle of the route we meet some Debu’s friends now we 6 to 7 boys were to gather. We reach the spot and saw that lots of people were already there. We park our bike and go towards the line.

I Meet my Friends

We find a place and sit there with some of our school friends. After sometime drizzling was start, we find some big leaf of tree and hide under them.

Sometimes later entry was open for the ground, army officers checking the documents and give entry. After showing our documents we move towards the ground.

People were sitting in the line and to manage all the crowd army men were standing there. I also move behind the line and sit with them.

The ground was muddy because that was rainy season, we sit on the wet ground. We get order to switch off phones and put it in our bags and sit quietly.

We all sit there for few hours and after that we move towards the next ground , in next ground we sit till morning. In morning time move inside the rally track, the condition of the track was not good due to rain the track soil convert into mud and track become uneven. Inside the track we all sit in the group and waiting for our chance.

I was so excited because it was my first experience. It was not possible to run in the track with the shoes. So we did not wear the shoes and decide to run without shoes.

After 2-3 groups our group number came, we move towards the track and take our position. After hearing the sound all start running. I also start running with them, but it become difficult to run on that track due to its bad condition.

Me Debu and his friends were together at the starting line, but after we start running I was running alone they were not with me. I ran with my full potential but the uneven surface of the track becomes my biggest problem and my feet start paining. When I was running I search my friends in the crowd but I don’t find them and thought that they might be ( at forward).

After completing one round I stop running because I know that I would not complete the second round, so I stop and stand at the side of the track and look behind to see that how many were behind me.

What I saw that Debu and his friends were coming only one guy was running with others, by watching them I was laughing and then I realize that they were behind me that’s why I didn’t saw them.

I was in little shock because Debu is behind me. He was running twice in a day and practice from many months.

We again sit inside the track and after all group done their running we move outside the ground.

After that we all came our home.

Thank you for reading my blog, I hope you had like it.