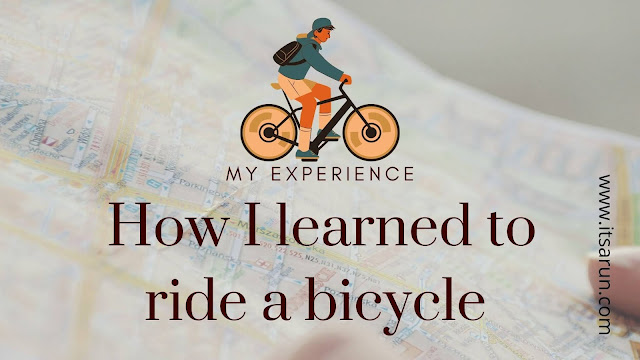 Today I am going to tell you how I learned to ride a bicycle and when I got my first cycle.

I hope that the experience of learning your cycle will be as fun as my experience.

I learned cycling in my village with my friends.

Earlier, there was no cycle like gear or soaker at the time, there was a simple cycle at that time.

I also learned cycling in those old classic cycles. My height was not even equal to a bicycle, since then I used to go with a bicycle.

Amazing way of riding the bicycle

Me and my friends used to take their bicycles and we used to roam on cycles. The family members used to tell me not to spoil the cycle, but I used to take out the bicycle silently and roam with my friends.

“It took a lot of footing in the paddles of the bicycle, but first they were pushed by right foot and left foot in the left paddle. First, pushing with the left foot, then a little speed would be made, then I would lift the leg. It was fun too. Sometime I fall from the bicycle, then I would stand up myself pick my bicycle and again start cycling.”

When I grew up a little, I learned to sit in a bicycle. If the feet did not reach the seat, I used to sit in the bar and used to ride bicycles like this.

What happened once that I had learned to ride a little bit of cycling, but I still did not know how to sit on the seat. I took a bicycle from home and went for cycling.

After cycling, I was coming back to my home, in between there was a turn. I was in high speed, I try to turn my bicycle but I failed with my bicycle I fell in the field.

At that time I was not hurt but there was something in front of the handle of the bicycle was bent due to the fall. I got up and walked home without riding the bicycle and kept the bicycle secretly and did not tell anyone.

Later, the uncle saw that the front part of the bicycle handle was bent, so he understood that I must have done it. I was also scolded a bit by my uncle, but my mother took my side and said that he is still learning a little bit.

When I learned to ride a bicycle, my family members asked me to get a bicycle.

At that time I was in 3rd class, before that I used to go to school in a rickshaw. I had asked to take a Ranger bicycle, then I was a child and my housemates said that it is not a good bicycle its parts are not available here, So I said yes to taking a simple classic bicycle.

My bicycle was of classic style but it was not full size, so its height was a little shorter. Then I started going to school by bicycle.

I love to ride bicycle

After passing 3rd class, we will go to Meerut with Dad. After going to Meerut, I got admission in 3rd class because I was weak in studies.

In starting when we went to Meerut we used to stay on rent, at that time we did not get room in the camp. My Mom and dad used to take us to school. My Father used to go on duty on bicycle.

Mom and dad used to come for taking us from school.

All three of us used to study in the same school, my sister and brother go home early from school my parents used to come early to get them and I used to come with my friends.

Sometimes dad used to come to take him, then I used to ask dad to leave the cycle for me. If he would not have any work so he leave cycle for me. I was very happy to see the bicycle standing.

We used to sit for three people on the same cycle and that was the different fun.

We get a room in the camp, then we used to go to school by bus.

Thank You for reading my blog

I hope you had enjoyed it.