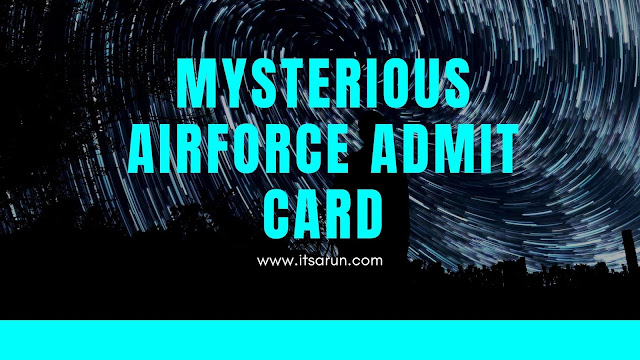 This was the year 2020. I filled the form for my Air force exam. My admit card had arrived. My exam was in Haldwani in February.

Then the corona virus came and my Air Force exam became postponed. Lockdown started in the whole country and everything shut down.

After staying in Lockdown for 6-7 months, everything was slowly opening up, and examinations were also taking place.

Gradually everything started becoming normal. So Dad also came on leave. He too did not come home for 9-10 months.

It was the month of September, all the exams were being done, He too had filled the form. So I also called my friend and asked him if he had come to know anything about our Air Force exam.

So he told that the date and center of the exam was on the website. His exam center was in Chandīgarh. At that time I did not know my email id, so I told him that I will see my exam center tomorrow and tell you.

I could not remember my email id even next day. I looked in my school documents and then I got the admit card of the previous year Air Force exam.

My email id was written in it. Then I checked my exam date and center.

I asked my friend Vikas whether he would go to Haldwani with me for my exams, he said that he has to go somewhere.

My exam was on 6 November, but I had not yet told about my exam at home. 2-3 days before the exam date, I got an email that my admit card was published on official website and send a copy of admit card on my email id.

I check my email id there was a admit card I download it. I check the place of my exam center and the timing of the exam. The reporting time was 2:45 pm.

I told my family members that I have an exam and that I have to go on November 6 and 2:45 is the reporting time.

Mummy said to go on a bike with dad. My dad was also ready to come with me. The exam center was some 3 hours away from my house. There was a plan to leave the house at 11 am on 6 November. I went to cyber café in the morning and got my admit card and some other documents photocopied from there.

I put all my important papers in the bag. If it was night for us to come back, we also kept a jacket, because in the night there used to be cold.

I kept everything in the bag, water bottle, sanitizer and mask. Around 11 o’clock we were ready to leave the house. I checked all the things again. Then we walked in the bike from home.

When we reached a little distance from home, I opened Google Map in my phone. I entered the starting point and then I checked my email to confirm the destination. I had my admit card in it.

When I opened the admit card, my eyesight fell on the exam timing in it, which was changed.

The exam timing I had seen earlier was 2:45 PM and the time I was seeing now was 7 AM.

It took me a while to understand what happened.

So I told them that it is not tomorrow but 7 o’clock this morning. So they started scolding me that I had not checked before.

We had reached 2 km away from home. He turned the bike back towards the house and on his way home, started to scold me.

What I used to say was I was confused how this timing change happened, it had not happened before, When we reached home, mother started asking why I came back, so I told her that the timing has changed. I turned on my laptop, in which I downloaded the admit card and kept it, from which I checked my exam timing and exam center.

What do you think happened with my admit card ?