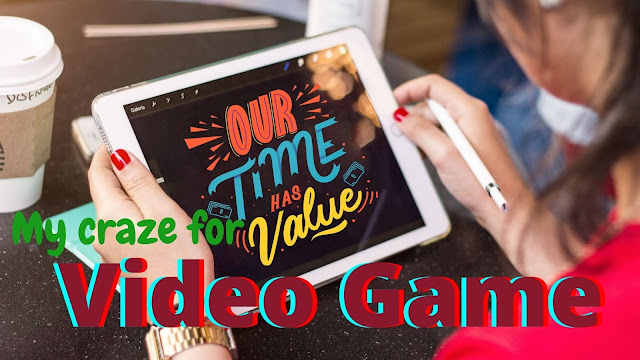 My craze for video games

Today I am going to tell you about the love and passion for video games.

I know that when you are small, you will also like video games.

When I was in Meerut, I was fond of playing video games. At first, I used to play in the Games Cafe. They were video games with coins. At that time Tekken 3 used to be famous. Whenever a guest came to my house, I used to look for the game first before asking for the phone from him.

Earlier we used to stay in Meerut on rent, we used to live on the top floor and the family who lived on the 2nd floor used to come to roam on the terrace in the evening.

So whenever he used to come up, I used to ask him for a phone and he used to play a ball game.

I had a friend Pradeep who had a computer in his house, so I used to go to his house for a month to learn computers. Initially, he taught me a few days, he used to turn on the computer and go for work in his father’s shop.

There was also a shooting game on his computer. After that, I used to sit and start the game and return home to play the game for two hours. For a month, I used to play games at his house on the pretext of learning computer.

Then after that, I stopped going, and at that time I paid 50 rupees for a month.

On the floor below us, a coaching person had taken 2 rooms on rent and he used to teach computer coaching to children on that floor.

She was also a teacher. Used to go to them in the evening and used to play car racing games with them.

In return, I used to do their small work.

Then after a few months, they left.

How I got my video game

By that time, I had come to know about the video game.

I asked my mother to buy it for me, but mom refused.

I and my friend Chandan started adding money to buy video games.

But at that time we used to get very little pocket money and the video game price was starting from 300 rupees. And it was a big thing for us to collect 300 Rupees.

Once my father’s duty was in Ayodhya, I asked him to bring video games for me. When Dad came back from there, I first started checking his bags. Dad had brought something for everyone, but when my turn came, my father said that he forgot. My face is like crying, then the father came out with a small video game out of the bag, in which he put the cell, I was happy to see it, but what I wanted was not that video game. I told my father that I want another my father said that he will take the one too.

I had already found out the video game shop and price.

Then a few days later Dad asked Mommy to buy a video game. I brought a video game with mom.

For a few days, I had gone mad to play the game. Before going to school, the game used to be opened, then after coming from school I used to sit in the game

His way of playing games was very funny. He used to press the button very loudly and he was completely shaken.

When I returned the money he had given me to buy the game, he refused to take it and said that to buy the new game chip from this money.

At that time the chip was available for 30 rupees and there were 4 games in it.

I used to save money for gaming chips and at the end of the week, I purchase a new gaming chip.

Stickers were attached to the game’s chip that who is inside the game chip and I would buy the chip only after seeing the sticker.

If I didn’t like those games later, then I would come back with that chip and exchange them with the other one. At that time I loved racing games, so most of the time I used to buy chips of racing games.

After a few minutes, we got a room in the camp and we went to the camp 2 km away from the city. My school was in the city, so we started going to school by camp bus.

I used to go 2 kilometers every week alone or sometimes with friends to buy a chip of the game on a bicycle. And if the game was not liked, then Chip used to go for the change. At that time I knew the same game store and every time I used to buy a chip from him.

After some time my video game broke down and then I stopped playing video games.

I got my first mobile phone in 6th class. And games were also played on that phone. But I had to do game purchases in it. There was a game of 10 Rupees which was deducted from the balance of the phone.

I will tell you how I switch from video games to mobile games in the next part.

Thank you for reading my blog. I hope you had like it.

Wait for the next part.

Best Holi of my life in school